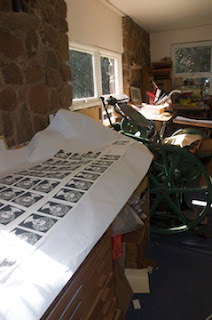 Next printery will have more drying space 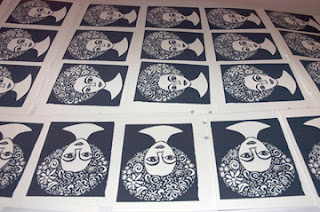 One of our most popular cards (all Linocuts) 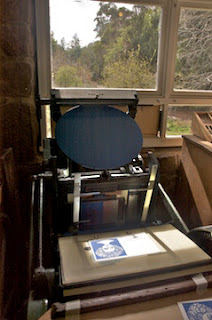 The Chandler and Price is nice to feed as it opens almost flat. But too many newcomers to Letterpress fit motors and they run them too fast. This is a recipe for lost fingers! I run this one by foot power at about 300 sheets per hour. That way I get to gaze at the landscape a little - which is beautiful at this time of the year.
November and December - busy, busy!
This week sees the press foot pedal thumping away! Lots of preparation for the Deloraine Annual Craft Fair and Beyond.  Joanne will be present at our stall at the Deloraine visitors centre (venue 11) and our work is also featured in the street windows exhibition (although the publicity so far has ignored this!) So  if you are planning a visit, drop by and say hello and stock up on chrissy cards.
We have been replenishing our card stocks as you can see. I will also post soon some pinhole photographs from the "new" camera. They look great.
Posted by lasimp at 10:12 pm 2 comments:

A friend of ours was visiting relatives in Dubai when she noticed a print of Joannes on the wall! Purchased in Sydney but not known when. Our records show it going in the late 90's 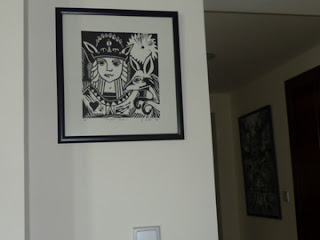 This year we are again selling cards and work at the Deloraine Craft Fair This is a annual event over a long weekend in November. Joanne will be having a stall at the visitors centre and we will be exhibiting work in a street show. Local artists take over shop windows and display work of all kinds. The craft fair is huge about 30000 people attend and stock up on original gifts for the christmas season or just wander around enjoying themselves. Its a good time to be selling hand printed Letterpress cards! 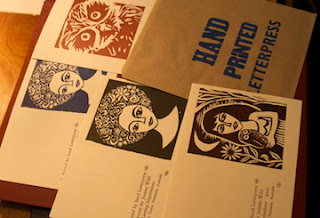 Part of the range. Original designs cut in Linocut. 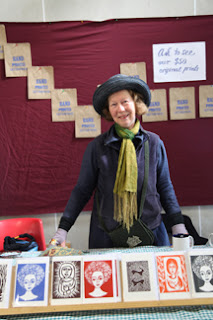 At a recent market. We always have a small Adana press at such events to demonstrate the "black art" of Letterpress. 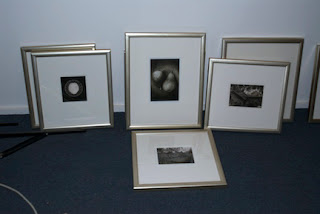 These are some framed prints for the street show. My work will be in the window of "Deloraine Digital" - our local Photo store.
Posted by lasimp at 4:38 pm 2 comments: 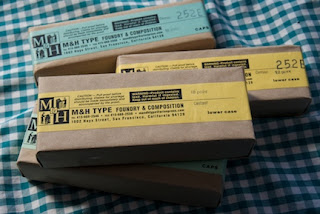 I really like crisp romans. For years this meant Garamond. Now I am adding Centaur to my mix of Romans. With the Italic Arrighi as well. 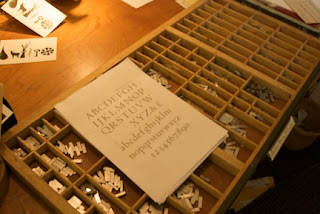 Here the 18pt goes out into the case 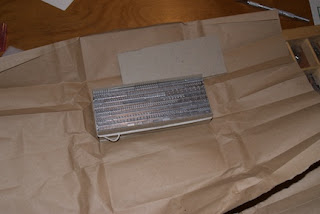 A new font as shipped. 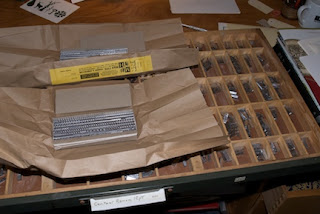 One of the great pleasures of printing is carefully putting all the letters, ligatures, numerals into the case. A great way to learn the case layout too.
Centaur is said by some to be one of the finest type designs for a roman.  Designed by Bruce Rogers initially for a private press it was picked up by the Monotype Corporation in the 1930's.
It really has impressed me with its crisp elegant appearance. There is something about making a press ready with really good new type, good ink and a fine paper. Very hard to beat. I order mine from M&H in San Francisco and it takes about two weeks of shipping. They are great to deal with, and have a great catalog of available hot metal.
Posted by lasimp at 4:08 pm 1 comment: 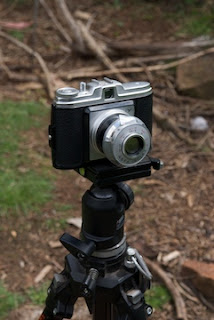 The lens is extended for use 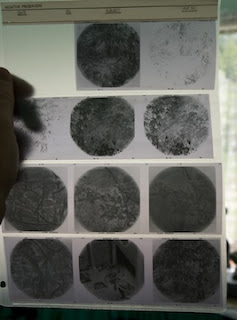 Interesting negs!
I've been playing with Pinhole cameras again!. The joy of making a new device. This time its an old Agfa Clack from the fifties. I noticed it had a shutter speed of about 1/25 but also more importantly a B setting. So I ripped the lens out of it and fitted an F262 stainless pinhole (thanks Bayden!). This gives me a 120 roll film camera that makes circular frames! Weird. I bought the camera years ago for $5.00 so its becoming a very interesting piece of equipment. Most exposures on a good day are around 6 seconds on Tri X - so the tripod mount is essential. I haven't made prints yet but the negs look interesting.
Posted by lasimp at 3:55 pm 1 comment:

With all the obits around for Steve Jobs I was surprised to hear mention the Last Wholearth Catalog. Steve Jobs mentioned in one of his speeches just how inspiring it was for him. Same here! Without a doubt it was probably the most useful book for me at that time. I tried to read Marx and Hebert Marcuse and all the radical reads trendy at the time, but I just don't have a head for too much theory. "Access to tools and ideas" was much more my line!
Everywhere I went in the early seventies people seemed to be reading and talking about the contents. Every share house, commune, collective, etc that I visited seemed to have a copy. There was an Australian New Zealand edition as well. It was like a precursor to the internet but without the rubbish!
it was put together using cold type composition, Polaroid MP4 copy camera and good old scissors, board and paste. As a Letterpress printer I could also see that the days of hot metal was numbered. I could also see that it was feasible to set up a press and publish with limited capital. A period of democratic printing was opening up with small offset printing.
We started on posters and pamphlets and by the 1980s had a offset printing business from which we were able to develop a letterpress operation. A funny trajectory but it was what we wanted. And then along came the Mac, (thanks Steve), Pagemaker Illustrator and Photoshop. Being out in the countryside I developed ways of getting film for platemaking that didn't involve sending files away. I would set jobs much bigger in size, output on a laserwriter and process camera reduce them onto film, to pick up resolution. Now process cameras have gone - we gave ours away, Lith film has gone, and to go into a offset printing business would require nerve and tons of money. Printing is becoming centralised, and digital presses are wiping out offset printing businesses.
But through it all Letterpress is growing as legions of people around the world choose texture and surface qualities only present in the last true printing process - Letterpress! 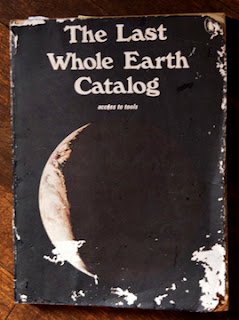 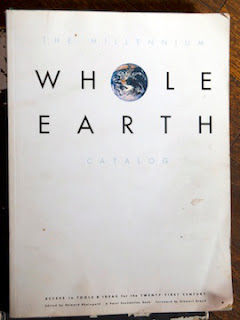 Heres my Last Whole earth Catalog, I even bought the Millenium one in 1994, really the last one! They are a bit ratty looking but still read.
Posted by lasimp at 3:46 pm No comments:

Its spring in Tasmania and blossom is everywhere. Its also time to  start digging the vegetable garden and poultry breeding 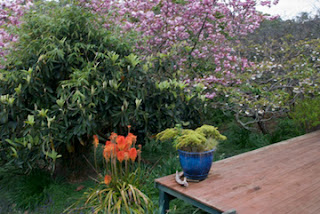 Small birds and mammals love our garden. Overhead protection and lots of food 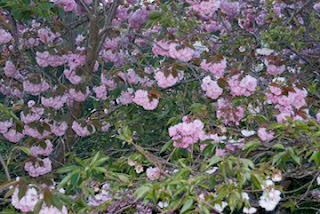 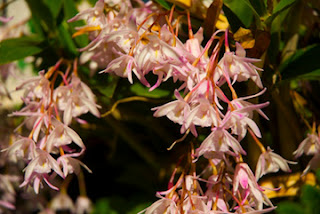 I grow a few orchids from more northerly Australia. This is a Dendobium
Not a great year for orchids but there have been a few first blooms on orchids L have had since the 90's. So that's something I guess. 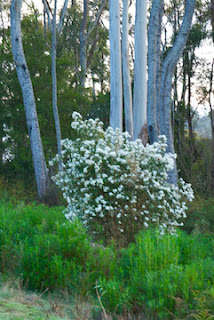 Native Daisy bush in our forest. Behind we have some Swamp Gum (E. Ovata). and huge wattle. 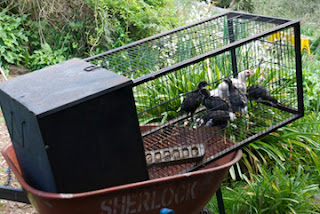 Every morning I barrow out the new chicks to the vegetable garden which has overhead protection from hawks. The chicks love this trip and get out onto the mesh and flatten out to enjoy the journey. Evenings can be cold, even frosty so they get a return journey. Barrow surfing!
We keep Anconas, Minorcas, and White Leghorns its a great interest to maintain and they keep us and friends in eggs and manure for garden
Posted by lasimp at 3:17 pm 2 comments: 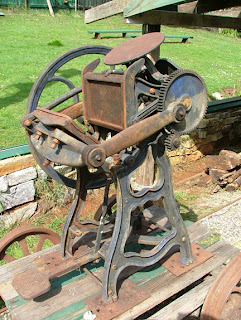 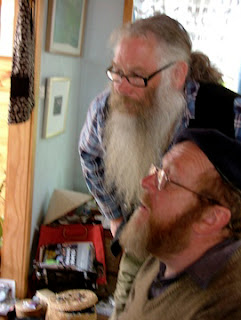 A Couple of Printers!! 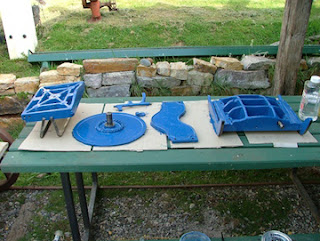 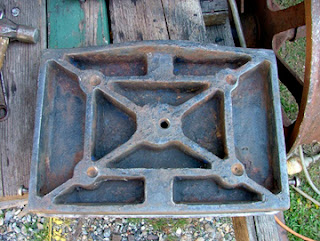 The platen cleaned but unpainted. No obvious smashes or dings 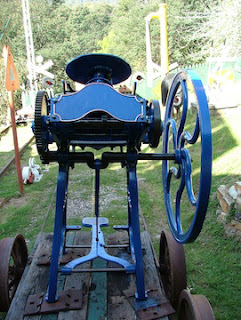 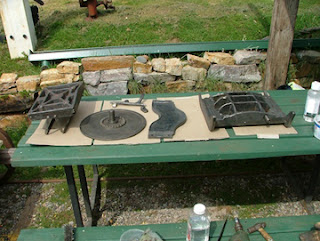 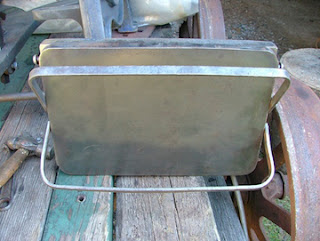 Platen face and Bed below 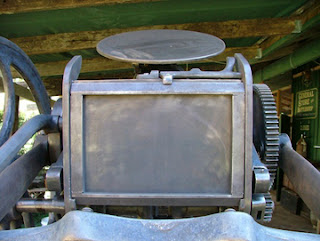 It used to look rough and pretty scrappy but not anymore! Howard has been busy stripping the press down to the frame and cleaning and painting. We got together a week ago and had a look at what could be done to finish it off. It doesnt have any rollers, just an old one and a couple of trucks. Luckily it looks like it will take Chandler and Price rollers and running gear. Also missing is the frisket bar mechanism (gripper bar if you are American!
The mystery still remains over what this press actually is -a Samson or a New Champion. Regardless, its not far off working now. Notice in the photographs some nice pinstriping on some parts. Deep down in the grime my Chandler and Price had a little striping once!
Posted by lasimp at 2:55 pm 1 comment:

An old friend, Howard, rang the other day to tell me of an interesting project he's working on for a local steam museum. The idea is to get an old platen press (donation) restored so that letterpress can be demonstrated to visitors with perhaps a little hands on activity that could be done by visitors. Its a very solid old press from the 19th century, but it has no makers ID at all. My guess is that many makers simply copied each other to capture a slice of the market. It is a clamshell design, and after a bit of research I think it may be a "New Champion". I have posted here a few old ads and a current photograph taken by Howard. it will look quite striking when completed and it looks pretty solid with three roller coverage. The rollers will be the tough part. Sourcing dimensions will be tricky. So have a good look and if you have one or know someone who does, we would love to hear from you. the blue colour looks just great.