Started up the Heidelberg Platen a few days back and heard an odd sound. I stopped to investigate and found an extremely thin mouse on the inside of the variable speed pulley. It seems he decided to have a sleep inside the pulley housing. Bad place. Now this mouse has contributed to the art production in the studio. 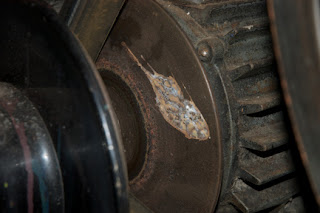 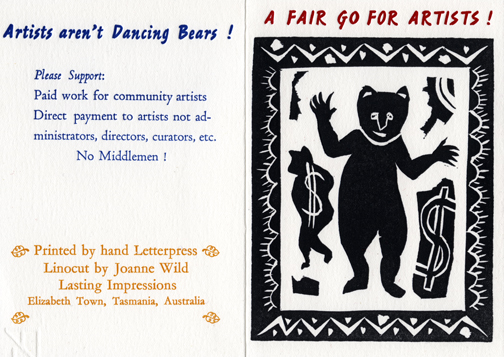 Here at last is our final letterpress protest piece - Don’t be a Dancing Bear! Its a linocut, mixed with type and printed on a Chandler and Price Platen press. Joanne cut the lino and it’s a very lively looking bear.
Why is it that those of us who choose to work as visual artists are being used as a largely unpaid labour force. It seems that visual artists are being expected to work as a form of public spectacle in community arts stunts for very little personal benefit. It seems that promoters and money is the reason for this stuation. Artist as a market commodity. There exists a core of people who have learnt to siphon off public arts money - which doesn’t end up helping artists.
In the 80’s and 90’s we operated without this layer of bureaucracy. For about a decade we were members of an art cooperative called battery art co-op with a membership of over 40. We organised shows of work in different cities of painting, photography, printmaking jewellery, sculpture, fibre, drawing. We did everything co operatively.
We operated a weekly life drawing class which raised money, and raised money from sales of work, tutoring, and entry fees for artists submitting work for show. We applied for and administered any grant money ourselves. At no time did we need directors, promoters etc. Our shows were democratic and not curated. In our nearest city, there was a gallery space which ran for years as a co-op showing members work monthly. It ran by membership meetings. In our local town we had a Co-op of working artists in established studios called Deloraine Art and Craft Professionals. This was a loose collaboration aimed at group shows and professional discussion. No Directors here either.
Personally I haven’t been involved in funded projects for many years but when I did, I applied, administered and acquitted all monies, and managed the project myself. Its not hard.
The rot set in with public money. Some who felt they could capture arts money began using regional arts groups as a base to set themselves in motion as promoters. Shop front windows are hardly the place to put artworks that is sensitive to heat and light. This happened to me twice and then I began to get angry about being told I was not community minded enough because I had protested about the running of this “event”. Our local arts group actually moved to protect the promoters interests and not artists! As far as I know none of these people are art practitioners.
So we are saying that artists who contribute work to these types of events are being dealt a very poor hand indeed.
The state government Arts minister and the federal government’s  ‘Australia Council’ should move to close off this type of activity. Arts money should go totally to practitioners. The history of artists organising themselves as I have outlined above shows that artists can easily manage themselves and don’t need the community arts circus. This is the United Nations year of co-operatives. lets support that initiative! The best place to start is in the art schools. Currently the business training is aimed at the artist as sole trader. There should be a broader scope of training in co operatives and collective self management.
Artists aren’t dancing bears. A fair go for artists!
Posted by lasimp at 11:40 am No comments: