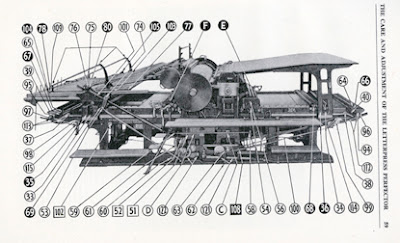 A few oiling points on this side!


An amazing booklet has been forwarded on by my friend John Lamp who is very able supporter of printing despite having a shocking back, not helped by my constant collecting of presses and bits and pieces over the years. He thought it would be interesting, but didn't realise that I had worked on these presses back in the 60's and early 70's. Luckily for John he relocated to Geelong and so he isn't rostered onto the moving team for the Ludlow moving! And these giants have been scrapped, although I was offered one if I could move it!
This is the biggest sheet fed Letterpress machine that I worked on. Starting out as a young probationary apprentice loading paper and oiling and watching each sheet delivered for 'spaces up' or running out of ink etc. Years later I worked one and then in 1984 Jo and I visited the printery on our honeymoon and saw the same press on its last week of its life. The last of 5 it was to be broken up. The Meihle Perfector was the mainstay of the government Printing Office in NSW (the largest in the southern hemisphere), and they ran night and day for four decades. There was also a 'Meihle Two Colour' - Similar but different! Two beds, two inking units and two cylinders. The sheet reversed for backup on the second cylinder but unfortunately because the backup was done wet it was not good on coated stocks and often looked slurry on any paper. The presses didn't register all that well either. They were great for printing Hansard, Bills and Acts for Parliament and were revered for their reliability. I couldn't handle the noise and it made me dream of being a hippy!! Notice the lack of a automatic feeder. We had them, but apparently these were chosen buyer the buyer. Ours had stream feeders with comb wheels. They had a speed of 1500 sheets per hour (3000 iph effective). 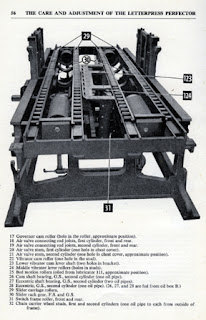 The four cylinders you can see here were the buffers. These helped the type beds reverse and had buffer cups fit into them as the bed went to and fro. Well, these cups were leather and I had to crawl under (with Neats Foot oil), once a week and wipe them. I was supposed to sing or whistle so that no-one inadvertently started up while I was under the machine. Instant mince! I sang "Yellow Submarine". Scary, and the oil stank. The rollers and runners supported the type beds. This is the base frame. 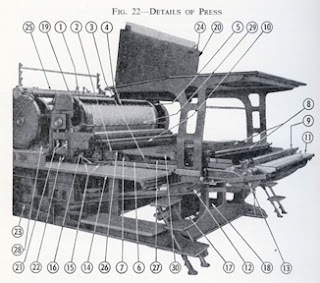 This is number one cylinder end open for makeready, but also not showing a feeder. Makeready could take 3.5 hours and a washup was at least an hour. Hence there was a constant war between printers (the union), and management, who to cut costs used cheap greasy non drying inks and you guessed it, the quality dropped because the second side slurred because of greasy inks. The end result was mediocre work that as typical of most public sector bookwork. Most of these printers, under pressure, just added more 'weight' and ran with too much impression. I didnt like this end of the press room much, too many old printers for a young bloke like me and too locked into their ways. Most were alcoholics and incredibly noisy. They were like this from a constant machine noise and had a complicated sign language, to signal, around the press. They lead a boring and predictable life and I resisted being shifted into this area. 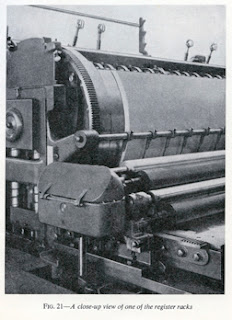 These are the form rollers and number one cylinder exposed for make-ready. The rollers could be removed by one man but it was easier with two. When these presses went, the press hall was filled with MAN Roland's but not for long. By the 1980's privatisation overtook this great Australian printing office and they were all scrapped. These presses were Quad Demy but often ran Quad Cap paper size. They just might be the largest sheet fed Letterpress machines the world  has seen. The Government Printing Office was the first press in Australia being set up in 1803.

Posted by lasimp at 9:19 pm No comments: 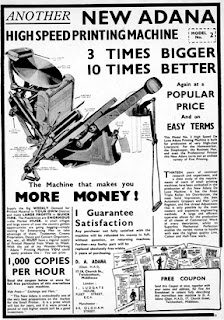 A Nice Picture of a good press. Its a 1936 advert for a 6x4 press that launched many a young printer. Or so I am advised by many UK origin folks who visit our market stall and also the British Printing Society of which I am a proud member.
Lasting impressions picked one up in a  second hand shop in 1986 for $40.00. We used it for years and made it work but couldn't quite work out why it had such primitive inking rollers. Years later when I replaced them I realised that the resourceful previous owner had slipped on some dairy milking hose over the roller stocks. I always wondered about the seam in the roller but somehow we made a lot of cash with this press.  Somehow!
Also, the weirdest Phallic design handle! We now use a 8x5 Adana and its vastly different. Notice how this ad features some sort of stirrup for foot operation.
This is the smallest press I have worked on if we discount the Japanese 'Baren'.
Posted by lasimp at 8:03 pm 2 comments: