When Photoshop was first released I bought a copy - the first for northern Tasmania. It ran only on Macs and we knew each other! All desktop publishing was Mac and at the college where I started teaching I began agitating for a studio of Macs. I could see that photography was going to be digital and I pushed for a radical approach to training. I wanted for once to have training in a leading position. We started in a small way and by 1996 we had scanners printers and some 20 computers. It was the political fight of my life as the Windows crowd were quite beside themselves with anger at having to compete for funds with wacko artists using Macs.  We had finally broken through but the opposition was still there in 2005 despite the fact that they had lost most of their training to private training providers.

We ran all the industry standard software and our graduates mainly drifted towards publishing because photography really didn’t get good cameras or printers until the turn of the century. After that, I had trouble justifying the darkroom even though students generally preferred darkroom work over digital. 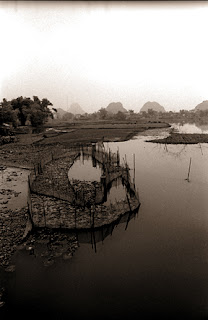 I was beginning to feel the same way. I noticed that digital could make really good pieces of film and these negatives allowed a photographer to work in many of the “obsolete” processes like Cyanotype, Albumen, Brown printing,  Dichromate (gum printing). These are all contact processes needing film the size of the final print, and sheet film disappeared as the printing industry that used it changed completely. Inkjet is the replacement and is very flexible.
For me though, I became interested in Photogravure. Firstly it was copper plate using a sensitised transfer sheet. This is the traditional 19th century method and it turned out to be fraught with problems and very unsafe. My darkroom despite all my safety precautions began to show stains from the Ferric Chloride etch - dangerous stuff. I wore apron, visor, and gloves but I began to feel very wary of this process. I stubbornly stayed with it until I had a print in my hand and quietly tried something else. 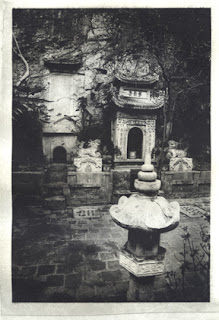 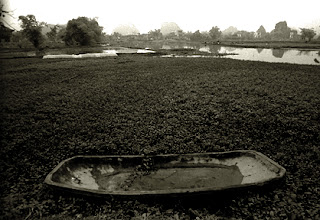 Photopolymer is a letterpress plate material that will make a gravure plate when worked with a film positive. It processes in water. Perfect! I had plenty plate material and soon I was making good prints. Its not without its moments though. It is actually quite tricky. A gravure attempts to be a continuous toned print emulating grain in which printing ink resides. Its an intaglio printing process and a “mezzotint screen exposure introduces the grain. A balance has to be achieved between the first screen exposure and then the main exposure. The plate material has to be fresh and the plate is prone to marking if its not finished cleanly and post exposed to harden it.
Once you have a good plate they are a joy to print and if you work hard it is possible to make about 15 prints a day!
Choice of colour is user driven and not determined by the process. Its just a matter of mixing an ink in enough quantity to edition. Same with paper. I like Fabriano Rosapina, also a good Letterpress paper.  gravure fits in with my love of Letterpress, Photography, and playing with my hands and brain! Making stuff!
I love making and converting bits and pieces. I built this vacuum frame out of a homemade copy stand a vacuum lid off a platemaker and a vacuum pump off a process camera. Works well! I've never owned a shop bought exposure unit.